The Indianapolis Sunday Star Magazine called Carey Cloud "The Year Round Santa Claus". So to start this thread off, here is Carey Cloud's Good Luck Elf, with a festive Christmas hat (Photoshop).

by larrydw
Hey Luke,
That looks like the Grinch that stole Christmas! Here are a couple of my buddies:

by Luke
The elf does look a bit like the Grinch.

I wanted to post a picture of a Nosco Cracker Jack prize, but I can't find it. It's the Covered Wagon, and tree. I was going to PhotoShop a few lights to the tree. I bet ol' Saint Nick used a wagon just like that, to deliver presents to good little cowboys & cowgirls, in the old west. 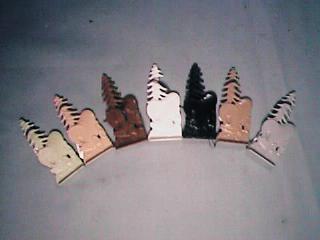 by Luke
It's a Cowboy Christmas!
The tree is decorated, and Santa's wagon is full of presents to deliver to good cowboys and cowgirls.

by dianep2
Oh Luke, what a beautiful Christmas tree behind your covered wagon. Those pioneers headed west so many years ago, had it nicer than I thought they did.

by gsullivan
Howdy Luke! The grinch is one of my favorite characters! And I love the pioneer tree. I can just imagine the little dogies, deer, and antelope looking at the strange lights in awe! And how delighted the pioneer children must have been to get their shiny new cap guns and swell cowboy hats with the string from Santa!

by gsullivan
Thought you might enjoy this Comic Poster. It is one of 25 in a set of Comic Posters distributed in Cracker Jack C 1968. These posters came folded in their prize sleeves. Any guesses as to what's in the package? Gail

It was December 24th, 1970 or 1971. My brother Clay woke me up, and wanted me to follow him to the living room. He wanted to get a look at all the presents under the tree. So we tipped toed quietly, to get a look at our glorious tree, surrounded with presents. We weren't as quiet as we thought, for we woke the angry ogre. I fled to the kitchen as fast as my tiny feet would take me. I jumped into the pantry. I was scared of the dark, but even more scared of the ogre. I could hear Clay trying to climb in the cupboard with pots and pans, but the ogre was already on him. Moments later the pantry door was yanked open, and I was face to face, with the angry one. We were busted.

So feel free to add my name to that list.